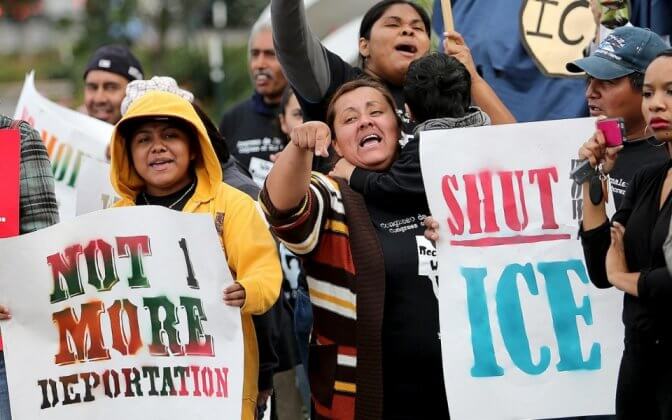 As many community members start to plan out emergency response teams and community defense, there is a need to think out short and long term organizing strategies that we can use so that we do not fall into patterns of solely doing individual deportation cases, press and mobilizing work, but are also thinking about long-term power building.

While enforcement under the new regime represents an expansion and escalation, it is built upon past practices that can provide us with key lessons now.

In 2013, the New Orleans community was facing an increasing ICE presence in immigrant neighborhoods including raids.  ICE would go to grocery stores, laundromats, bible study groups, and housing complexes. Agents would stop anyone who looked Latinx, handcuff, and fingerprint them. The Congress of Day Laborers started organizing to fight individual cases of community members picked up in raids. In one case, ICE accidently included a document in response to a prosecutorial discretion request that revealed the raids were part of the Criminal Alien Removal Initiative (CARI).

What was learned in the organizing efforts to fight back against CARI can be useful as we respond to the Trump’s administration ongoing attack on our communities.

Here are three things I learned:

With a regime unapologetically trying to destroy our communities, some may respond that we don’t have the power to change ICE’s practices. Others might allow raids to divert all their energy into individual deportation case campaigns.

Both responses miss two key things. First, raids serve as an awakening moment for different sectors of our communities (labor, racial justice, faith) to respond to the crisis if we organize them. Second, we may not be able to change ICE, but we do have the ability to force local politicians to break with the federal deportation efforts. The ability to build new coalitions along with the fact that ICE is showing how destructive they are opens space to force local politicians to change their policies around policing and incarceration.

The report from Mijente, “What Makes a City a Sanctuary Now” illustrates many ways in which local politicians can help create roadblocks for ICE’s rogue enforcement and create limitations to overzealous local policing that already exists.

“There are no short cuts; we have to build power. We must publicly denounce the raids, we must respond and show our anger.”

We might not necessarily be able to win with ICE directly, but we can shift the policies of police chiefs, sheriffs, state agencies that are collaborating with them.

There are no short cuts; we have to build power. We must publicly denounce the raids, we must respond and show our anger. But we also must know that in this moment, more media coverage does not necessarily mean results. We must dig in and do that work of organizing a base and organizing sectors around us. If we can’t reach the head, we go for the foot. The crisis created by the federal deportation machinery clearly becomes a line in the sand to ask ourselves, local officials, and others in the movement: What side are you on? What are you doing to dismantle ICE?

2. Being Present at a Raid Matters

While chasing every Facebook rumor could leave an organizer constantly running, it actually is important to get to the scene of a verified raid when possible. Organizing efforts should always evaluate their capacity to decide their response strategy, but frequently being the first on the scene allows us to

“If done intentionally, having rapid response to raids and ICE enforcement can be a base building strategy that can strengthen our ranks.”

In New Orleans, folks consistently reported raids, because they understood there would be a response from the organization.  Having an organizer/supporter present helped educate people on what their rights were, helped highlight needs for organizing, and allowed for folks to be invited into the work. Some might ask ‘if raids happen so quickly, why try to go to the scene?’ If done intentionally, having rapid response to raids and ICE enforcement can be a base building strategy that can strengthen our ranks.

Having practices in place to verify what has happened also helps ensure that when we are informing the community about ICE raids that we have verified that it took place and details so we’re not contributing to the panic and fear immigrant communities are already feeling.

Community members remember who was there. A way to base build is to accompany our people in the times of highest vulnerability. Phone lines and online reports are helpful but nothing can substitute being present. If you hear that a raid happened in an area and you have the ability, go and ask questions.

Details matter. By documenting the stories of victims and witnesses of ICE’s raids, we were able to find out what is happening and understand patterns. More now than ever, ICE and Border Patrol will lie and hide their mistakes. File an incident report for each case of ICE activity you hear about.

“ICE will mess up. We have to be ready when they do and use the information for the defense of our community.”

ICE is known to be an agency that lies, uses excessive force, hides information, and violates civil rights.  For all of these reasons, it is important to document what ICE is doing, and what patterns we see in how they conduct enforcement.  Documenting incidents with precision and detail can help inform organizing strategies, know you’re rights trainings, and can be the basis for litigation in the future.

ICE will mess up.  We have to be ready when they do and use the information for the defense of our community.

For more information on how to document raids, please see this intake form to help fill out an incident report.

Other documentation strategies can include taking community members’ affidavits or statements.  These stories can be used in the media, as well as to develop organizing strategies that can develop critical analysis with our members. To obtain additional documentation, organizers also can file public records requests with local police and ICE.

If folks want to fight, do it. What seems impossible today becomes possible tomorrow when we organize. There are real risks and likely greater ones now than ever before that we have to have honest conversations with folks about when they organize against ICE. But there is also a great risk in not doing anything.

What Makes a City a Sanctuary Now

A Guide to Community Defense Zones

Jacinta Gonzalez is the Field Director of Mijente.