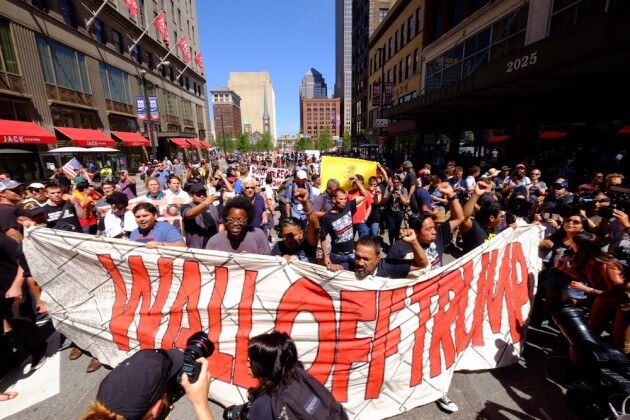 Updates from #WallOffTrump Protest at the RNC

In response to Trump’s insults, threats and his promises of mass deportation and building a border wall to separate neighbors, communities are traveling to Cleveland to give him a wall of their own.

“If Trump is set on building a wall. We’re going to give it to him,” explains Marisa Franco, director of Mijente. “But we’re be walling off his hate. We won’t go quietly as he campaigns to put us back in the closet, back across the border, or to the back of the bus.”

“The walls that they build…”

Protesters sing while they form a human blockade to #WallOffTrump at the #RNCinCLE.https://t.co/7UOhL7pmxz

Eva Cardenas of the Ruckus Society added, “Standing with front-line communities to create a line of defense against Trump’s hate and racism is all of our responsibility. We’re not just sending a message against Trump, we’re calling on everyone to stand up and take responsibility for the future of this country.”

While Trump’s wall is an emblem of his xenophobic drive to Make America Hate Again, the protest wall to be built by organizers, artists, parents, children, and veterans gathered together by Mijente, the Ruckus Society, Iraq Veterans Against the War, Working Families Party, the Other 98%, First Seven Design Labs, Grassroots Global Justice, and others will be a line of defense for the future of the country.

The indiegogo for the project surpassed its goal of $15,000 with more than 600 individual donations, including support from groups in Mexico who are insulted by Trump’s positions.

Speaking on behalf of La Burra Blanca, Libre y Sin Temor; Prevención, Capacitación, y Defensa del Migrante, A.C. (PRECADEM), and Radio Zapote in Mexico, Iyali Garcia Esquivel explains, “Mexico does not solely export its people and its resources. We also send our resistance and our dignity… This is our response to ignorance. In solidarity from Mexico to the United States, we’ll be part of raising up the wall to block Trump… We’re not just walling off Trump. We’re demonstrating to the world that our bonds are stronger than his rhetoric or any border. Because we don’t forget our people even if they are far away and we won’t stop fighting shoulder to shoulder alongside them.”

On the third day of the Convention, the wall builders are peacefully standing up to the hatred represented by the Republican candidate, defending their communities, and calling for others to wall off Trump and his hate across the country.

PHOTOS WILL BE AVAILABLE (Credit: Hope in Focus): http://bit.ly/rncfoto

Mijente is a national political home for Latinx and Chicanx organizing – @conmijente.

Meanwhile in Los Angeles, someone else already started replicating #WallOffTrump: