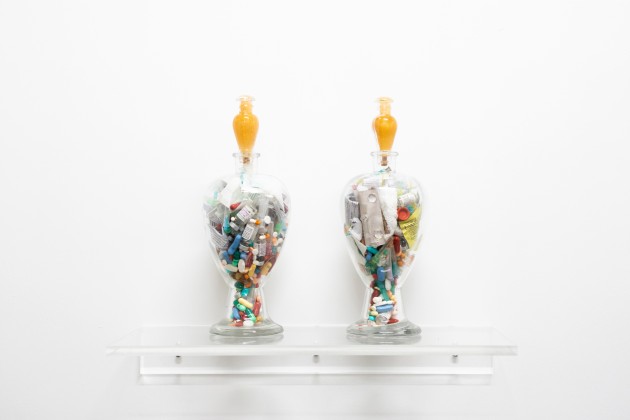 “He is not experiencing the same Covid as we are”

President Donald Trump put out a video after leaving Walter Reed Medical Center, in which he affirmed “don’t let COVID dominate you, don’t be afraid of it, you’re gonna beat it.” We spoke to three Latinx creatives at the intersections of queerness and disability about their experiences receiving care during a pandemic and the ways they’ve seen ableism show up this year.

Alex Dolores Salerno is an interdisciplinary artist drawing on their experience as a queer trans disabled Latinx person, working with themes of interdependency and the commodification of rest. They shared that the pandemic has limited the amount and quality of support they can receive; their ongoing attempts at finding medical support for their chronic pain condition have been halted. “A few months ago I attempted to see a physical therapist and there was no social distancing or proper disinfecting procedures,” says Salerno.

“The most defining manifestation of ableism I’ve seen throughout these times has been how collectively there’s this desire and push to abruptly return to normalcy,” Kevin Quiles Bonilla told Mijente. As a Puerto Rican queer man, a migrant, and a person with a disability this year has been heavy. Quiles Bonilla says that to a certain extent the desire to return is deeply rooted in capitalist ideals, which heavily disregard people with disabilities. “In the end, this abrupt return to normalcy ultimately only favors those with the strongest immune systems.”

What are some other ways ableism has shown up this year? Salerno says they’ve seen it show up in the shortage of hydroxychloroquine incited by Trump’s baseless claims that it could treat COVID-19. “[in] the deprioritization of disabled people when rationing ventilators. [in] the lack of awareness and care for those who are immunocompromised or immunosuppressed,” they share.

Back in April policies in six states, Connecticut, Florida, Indiana, Kansas, Minnesota and New York––where Salerno lives––said that hospitals should consider taking ventilators away from patients who rely on them daily if others need them more.

As stated by Quiles Bonilla, Trump being diagnosed with COVID-19, getting steadfast and luxury care, and then publicly stating to not be afraid of it “is like adding insult to injury…He is not experiencing the same COVID-19 as we are.”

Many people who passed away this year due to the virus did so on the aisles of hospitals because of the lack of hospital beds, some didn’t even make it to the hospital, and died on subway trains and platforms.

Still, the rhetoric used by this administration is nothing new. “It is an echo of decades and centuries old policy and national belief in a white supremacist system,” Eraso shares, “it’s not just a question of 45’s access to healthcare but part of a much larger interrogation of the state of privatized healthcare in the US and the legacies of genocide and slavery that carry over to structural racism and eugenics in healthcare and medical trainings.”

“The queer and crip community is innovative,” Salerno affirms, as they’ve seen their communities be proactive with mutual aid during the pandemic.

“One of the biggest actions we can do at this moment is to check in on our loved ones,” said Quiles Bonilla “whether near or far away, and remind them that they’re not alone.”

xime izquierdo ugaz (they/them) is a multimedia artist with roots in the andean & amazonian regions of Perú. A curator, educator, & language justice worker; their work primarily touches on intergenerational trauma passed down in relationship to place & migration. Their work has appeared in PEN America, SOMA, El Museo del Barrio and Lambda Literary. Their first chapbook is titled Estoy Tristeza (No, Dear Magazine & Small Anchor Press, 2018). You can find them @huacatayy for fundraisers for trans BIPOC, poems, portraits of queer fam and their life in Lima, Perú with their cat, Ocean.