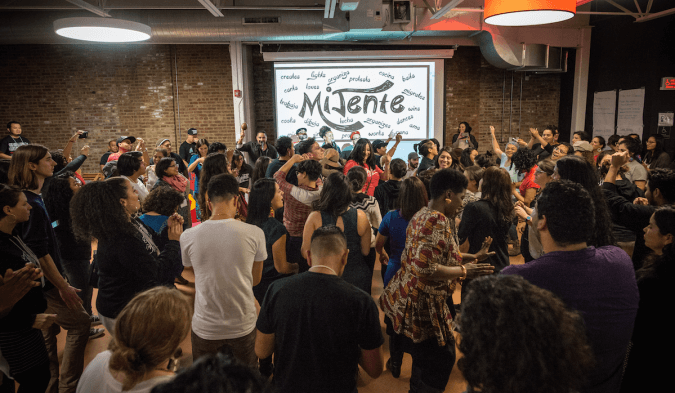 The moment feels like it was yesterday. At a local Phoenix community center , we waited for the results of the 2016 election — waited to find out if our push to finally topple Maricopa County’s notorious sheriff Joe Arpaio had been successful. Local election results trickled in, and it became clear that we’d won. As the news spread, the momentum led us, marching through the streets to the Sheriff’s building to celebrate the victory at his doorstep. Through the chanting and community members speaking, we continued monitoring the results from across the country. By the end of the rally, the news from the presidential race had taken shape. It was like a scene from a horror film, where the villain is finally vanquished and to everyone’s dismay, a new foe emerges. Those of us from Arizona knew all too well what a Donald Trump victory meant. We had lived it. But we had also beat it. And we knew what it cost to do so.

•The potential re-election of Donald Trump poses significant threats to us all and to the planet. By engaging in the electoral arena we are ultimately setting up the most favorable conditions for organizing for the solutions we want and need;

•Though the electoral process is structurally flawed and no singular candidate represents our views in totality, we cannot and will not sit on the sidelines in the 2020 elections;

•In the face of seemingly impossible odds, ordinary people can do extraordinary things, and we must.

Mijente was created in 2015 to bring attention to and address the lack of political organization in the Latinx and Chicanx community – independent of the establishment of the Democratic party and corporate interests – to fight for economic, racial, gender, and climate justice. It is not enough to simply wait for demographics to change our destiny, our fate is in our own hands.

That’s why in 2020 we will carry out our first full membership endorsement process. Together we will decide whether Mijente will endorse one candidate, multiple candidates, or make no endorsement at all in the Democratic primary. In 2020 Latinx people will form the largest racial/ethnic voting bloc in the electorate. We are often an afterthought for the Democratic party and political campaigns. The thing is, we can’t afford to wait for others to get the memo. We’ve got to do the work to mobilize, energize, and engage our gente.

We’ve already started. With the El Chisme 2020 series we contacted candidates for the Democratic Presidential nomination and posed questions that matter to the millions of us who hail from el Caribe, Sudamerica, Centroamérica y en Norteamérica. Secretary Julian Castro, Senator Bernie Sanders and Senator Elizabeth Warren all participated in the event. El Chisme 2020 created a space for people to learn more about the candidates’ perspectives on issues but most importantly for people to see themselves, their values, and their communities in the conversation.

Whatever the outcome of this endorsement process, we hold that the most important thing is this: to mandate an agenda that doesn’t just fight for the status quo pre-Trump, but for new solutions that get to the root of the problems we face. Engaging in intra-movement battles pitting Senator Bernie Sanders and Senator Elizabeth Warren benefits no one but the 1%. Mijente includes people with a wide range of perspectives and favored candidates – we embrace that. We are clear that it’s not just about the tallies on election day but about what we build and learn together and whether or not we are in a position to move together after this election cycle. Victory is when communities who have long been taken for granted are no longer an afterthought and begin to influence the political debate, the issue agenda, who is on the ballot, and make all of this actually matter by enacting the leadership, policies, and change we need.