ALEC is everything Mijente stands against. Join our fight! 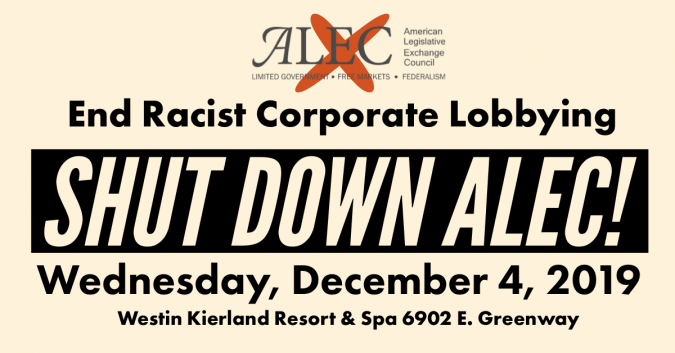 SB 1070 in Arizona. Stand Your Ground in Florida. Three Strikes Law in California.

What do all of these laws have in common besides causing lasting damage to our communities?

ALEC is behind them.

ALEC (American Legal Exchange Council) is made up of conservative state lawmakers and corporations. It is a right wing policy machine that allows conservative legislators at the state and national level to literally copy and paste and help enact dangerous legislation.

Its strategy is simple. Centrally create harmful legislation. Feed it to conservative legislators to pass in one state. Incite copycat bills across the country.

And the legislation they have created is insidious. It criminalizes our people, separates families, erodes union power, suppresses voters’ rights, and picks away at environmental protections, while protecting corporations and promoting laws that boost incarceration and e-carceration to benefit for-profit prisons and tech companies.

Bankrolled by corporations who “donate” close to 9 million dollars each year, ALEC holds 501c3 status, making those corporate donations tax-exempt. ALEC executives rake in six-figure salaries and their CEO receives close to half a million in salary and bonuses, all while operating as a partisan lobbying group despite their shady spin that they do no such thing.

The fight against ALEC is deeply personal to Mijente. In 2010, before Mijente even existed formally, Arizona passed SB 1070 and more than 20 states followed suit and introduced similar bills.

Lawmakers proudly called SB 1070 “the toughest immigration law in the U.S.” Key immigrant rights organizers called it what it is: a racial profiling law rooted in anti-immigrant and anti-Latinx sentiment. They rallied against it, marshalling supporters from across the country and pushing SB 1070 to the national stage. Fighting ALEC’s dangerous agenda is at the root of our beginnings because out of that fight, those key organizers founded Mijente.

ALEC works to destroy our communities and our values. As long as they hold power, our work is not finished.

In the face of powerful resistance to mass incarceration, ALEC has evolved its profiteering goals to promote new forms of criminalization. Freedom can still be curtailed through the growing popularity of so-called “alternatives,” like electronic shackles.

This month, ALEC will hold its annual summit in Phoenix. It was at a summit like this one ten years ago, that SB 1070 was born. This week, we join local and national groups to pull back the curtain and demand that legislators pledge not to work with them. Will you help us?

Join us Wednesday at 3pm for a rally at the Westin Kierland Resort and Spa in Phoenix, AZ, where ALEC will be holding their state and nation policy summit. In collaboration with Puente, along with other Arizona groups such as Red for Ed, Arizona Palestine Solidarity Alliance, Black Lives Matter Phoenix Metro, No More Deaths, Sunrise Movement and others.