Our Top 5 Moments from “El Chisme 2020: One-on-one with Bernie Sanders” 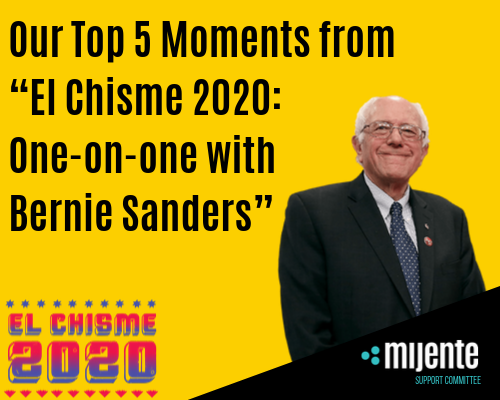 Our goal for “El Chisme 2020: One-on-One with Candidates” was to center Latinx voices, get real about issues our gente face every day, and finally be represented in political debate. During our first event with Senator Bernie Sanders, we did just that.

Audience member Kimberly Arellano spoke about her mom who was pulled over by a Las Vegas police officer and turned over to ICE. She wanted to know whether Bernie would end 287g contracts and how else he would separate local law enforcement from immigration.

Bernie recounted speaking to teachers in Los Angeles who told him about the trauma children of immigrants face, fearing they’ll get home from school only to find that their parents were detained. “We cannot have millions of people and children living in that type of fear,” he asserted.

We pointed out that the El Paso massacre against our gente is just the tip of the iceberg. What specific policies was Bernie ready to push to end white supremacy?

And in Puerto Rico, we moved away from the usual topic of hurricanes and got real about PROMESA and whether Bernie would cancel Puerto Rico’s massive debt.

Even Bernie acknowledged throughout our conversation that we asked questions that don’t get asked enough.

We pulled out 5 of our favorite moments. What were yours? Missed it? Check it out in English or Spanish.

5.  “To say ‘paternalistic’ would be an understatement”: Bernie on the history of the U.S.’s relationship to Latin America

This is what happens when a fierce crew of Latinxs creates programming that centers Latinx issues. Props to the Mijente team, our Las Vegas community, and partner NowThis for helping us make and share these moments widely.

Hasta la próxima! Get the latest updates on our one-on-one conversations with Democratic candidates by signing up for our emails!