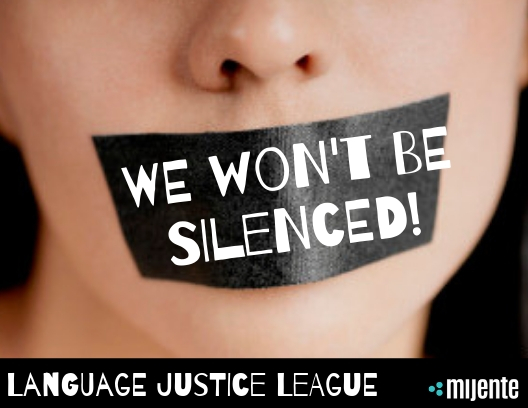 On July 3, 2019, the San Francisco Chronicle reported that the Trump Administration Department of Justice (DOJ), through the Executive Office of Immigration Review (EOIR), “is preparing to replace in-court interpreters at initial immigration court hearings with videos informing asylum seekers and other immigrants facing deportation of their rights.” On July 19, US News & World Report reported that “the videos were rolled out earlier this week in some courts in New York and Miami.”

This change comes on the heels of the Immigration and Customs Enforcement (ICE)’s nationwide scaled up raids targeting over 2000 immigrants, their families and any undocumented immigrant they encounter while executing the operation. One such raid was just executed in the state of Mississippi on Wednesday, August 7. That day, ICE arrested 680 workers from several chicken meat processing plants. These are 680 more people who will be affected by replacing live interpreters with a video.

Mijente’s Language Justice League Responds. The Language Justice League (LJL)—a national Mijente crew made up of members who are language justice practitioners—works to ensure that our people are able to communicate and participate in movement work in whatever languages they use; we use interpretation and translation to make language justice a part of our culture. Fundamentally, we believe that everyone has a right to express themselves in their languages, to understand and to be understood.

The LJL strongly opposes the DOJ/EOIR’s move to silence immigrant voices. We see this as yet another effort to dehumanize and terrorize immigrant communities and continue to advance a white supremacist agenda. Replacing live interpretation with a video that cannot answer any questions or clarify any doubts is dismissive of the trauma of the asylum journey; it is nothing more than an attempt to deprive human beings of a dignified legal process. We demand that the EOIR commit to justice in the immigration court system and that the Department of Justice stop its attacks on due process rights.

We see this decision as part of a larger strategy that this administration is weaving to attack our people. On May 24th, 2019, a little over a month before this announcement, the Department of Health and Human Services (DHHS) issued a proposed regulation to amend Section 1557 of the Affordable Care Act (ACA), weakening requirements for providing language access in healthcare to people with limited English proficiency (LEP) in healthcare. For a good overview of all these attacks read The State of Play for Immigrants & Language Access in 2019 by Mara Youdelman of the National Health Law Program (NHeLP).

The legality of the announced change is questionable. In addition to being fundamentally unjust, the administration’s unrelenting attacks on language access rights are also of questionable legality. Title VI of the Civil Rights Act is the cornerstone of language rights. It states:

“No person in the United States shall, on the ground of race, color, or national origin, be excluded from participation in, be denied the benefits of, or be subjected to discrimination under any program or activity receiving Federal financial assistance.”

Under Title VI, recipients of federal funding must ensure meaningful access by persons with LEP to programs and benefits. Since Immigration courts are federally funded, and a multi-language video can hardly be considered meaningful language access in a court of law, we question the legality of these changes, and we stand committed to support any legal challenge brought forward against this move.

Why fight for language access in courts? Court Interpreters play a critical role in all court proceedings throughout the U.S. The role of the interpreter is to help the Court and its officers place the defendant with Low English Proficiency (LEP) as closely as possible to the same LINGUISTIC situation as an English speaker. Having an interpreter does not give any advantage or disadvantage to the Respondent in Immigration Court (or any other court). Without interpreters, people are linguistically absent in proceedings against them because they cannot understand what is happening, ask questions or be understood.

As language justice advocates, interpreters and translators alike, we have a duty to act ethically against attacks on language access, especially when they are used to oppress people. These attacks silence people who bravely come forward to speak truth to oppressive forces and dehumanize people who are under threat of being erased within the justice system. These attacks go beyond access to due process or to health care; we believe they aim to make us internalize the lessons of discrimination. They tell us to be quiet or speak in deference to privileged voices.

Language exclusion is the first step in dismissing our dissenting voices. To fight for language access in court, we MUST fight for language justice. Interpretation and translation are tools to counter Linguistic Exclusion, but the ”Why” behind them must be front and center. That’s because language justice is our way of asserting, unapologetically and in no uncertain terms, that we will not be silenced, and we will not let the voices of those who need to raise them the most, be silenced.

1) SIGN THE PETITION. Join the Mijente Language Justice League and Mijente members in asking the DOJ and the EOIR to reverse this recent policy change and restore in-person interpreters in immigration court master calendar hearings.

2) Be the resistance. Build a Cultura de Resistencia. If you self-identify as Latinx, and your values align with the liberation of our people, become a Mijente member!

3) Upcoming webinar. Learn more about language justice and how to build spaces that honor all voices and languages. Be on the lookout for the date of our upcoming Language Justice League training webinar for Mijente members and register.