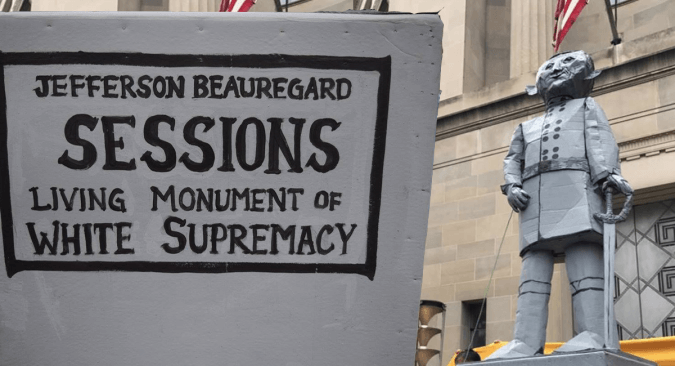 New York, NY — Marisa Franco, Co-Founder of Mijente, the political, digital, and grassroots hub for Latinx and Chicanx organizing and movement building, issued the following statement in response to the Trump administration’s decision to remove Jeff Sessions as the head of the Department of Justice.

“Jeff Sessions’ tenure was marked by inhumane efforts to target and attack Latinx communities. Under Jeff Sessions’ leadership, the U.S. Department of Justice (DOJ) enacted policies that have devastated thousands of our neighbors. It was Jeff Sessions’ decision to enact a Zero Tolerance policy that separated children from their parents at the border, his endless power grabs rigged the immigration court system, and the mass arrests and incarceration that he supported have pushed our justice system to presume guilt over innocence.
While we welcome Mr. Sessions’ departure, we know all too well that merely replacing the head of the DOJ will not bring respite to the Latinx community with bullseyes on our backs. The DOJ must end Operation Streamline — the egregious and unethical prosecution of large groups of migrants at a time — and restore civil and human rights for migrants, asylum seekers, and refugees who are coming to the US to seek safety and instead have found themselves imprisoned.”
Marisa Franco
Mijente Co-founder

Mijente is the political, digital, and grassroots hub for Latinx and Chicanx organizing and movement building. Launched in 2015, Mijente seeks to strengthen and increase the participation of Latinx people in the broader movements for racial, economic, climate and gender justice. @conmijente @gente4abrams