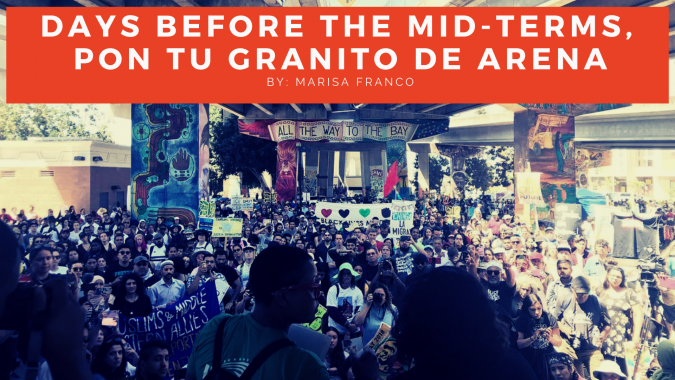 Every day we wonder if things could get any worse. For so many across our communities, it does.

Trump is clear that the elections are a referendum on his agenda and tactics; he’s aggressively making his closing arguments and touting his track record this week. From sending troops to the border, promising fictitious tax cuts, seeking to erase transgender and gender non-conforming people, to threatening to eliminate birthright citizenship. 45 is doubling down on the fear-mongering and right-wing extremism that delivered the White House in 2016. The midterms are a vote to demonstrate where you stand on Trumpism.

Latinx folks, we need to respond and show who we are, and who we can be.

We are a massive community in the United States, and we are growing. Some of us have been here for hundreds of years, and some of us are very new to the U.S.

Trump has declared war on  all of us, not just the most vulnerable amongst us.. We are being used politically right now – as scapegoats, as punching bags, as bogeymen and bogeywomen, as a collection of old stereotypes to be exploited for the benefit of sowing division and hate.

We have been called the “sleeping giant,” because we have the potential to be a formidable force in this country. One thing we know is that we have been fed (and too often swallowed) a story of survival that says: “Keep your head down, don’t rock the boat, and you will be safe.” It should be clear by now, this is no longer an option. The lie that he is targeting someone else is just that, a lie.

He said he would ‘drain the swamp” of Washington DC corruption, when he has instead flooded our political system with corruption. He said he would fight for the underdog yet he defends dictators and delivers this country’s wealth hand over fist to billionaires. He takes everyday working people and every week strips more of us of our rights and dignity, because of our race, our class, our gender, or because of who we love. We are not the only community under attack, and we refuse to define the battleground around a single issue, because every tragedy – from Louisville to Pittsburgh to Tornillo – is directly related to the last one, or unfortunately, to the next one.

We may not be able to solve this in one day, with one action, or in one campaign. But for those of us who have to work for a living we make a way by putting one foot in front of the other. We tackle the immediate challenge ahead, or take advantage of the immediate opportunity. So, here is what is in front of us: an election in less than a week, and we all have to all do our part. Latinx folks, we need to respond and show who we are, and who we can be.

If you are able to, come out and vote. If you are able to do get out the vote. If you are able to, spread the message far and wide. We need to do everything we can to put a check on this Administration and dangerous enablers and cheerleaders who threaten us in ways we perhaps cannot fully imagine. We have a responsibility to one another as a people who honor familia y comunidad to show up for each other in this moment of crisis. Some of us with the most power to make these changes are those of us who are registered but do not vote often, and who can turn out those who rarely vote.

Trump and his supporters know how important these elections are, and they know how powerful our community is. They are throwing attack after attack in the hope that we will go numb with fear, retreat or withdraw. The problems are big, for sure. But so are we. Los grandes se ven grandes porque estamos de rodillas.

Find information on how to vote in this election.

Marisa Franco is the director of Mijente. She is originally from Guadalupe, Arizona. Follow Marisa on Twitter at @marisa_franco