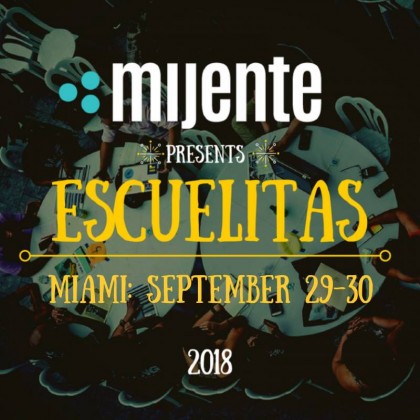 We are so excited for our intergenerational panel at the Miami Escuelita for Latinx changemakers this weekend September 29-30!

Here’s a preview of the poderosas that will be sharing time and experience with us. Check out the full agenda aqui and remember, it’s not too late to Register!

Rosa Alicia Clemente is an organizer, political commentator and independent journalist. An Afro-Puerto Rican born and raised in the Bronx, NY she has dedicated her life to organizing, scholarship and activism. From Cornell to prisons, Rosa is one of her generations leading scholars on the issues of Afro-Latinx identity. Rosa is the president and founder of Know Thy Self Productions, which has produced seven major community activism tours and consults on issues such as hip-hop feminism, media justice, voter engagement among youth of color, third party politics, United States political prisoners and the right of Puerto Rico to become an independent nation free of United States colonial domination. Rosa was the first ever Afro-Latina women to run for Vice-President of the United States in 2008 on the Green Party ticket. She and her running mate, Cynthia McKinney, were to this date the only women of color ticket in American history.

Her groundbreaking article, Who is Black?, published in 2001, was the catalyst for many discussions regarding Blackness in the Latinx culture. As an activist with Black Lives Matter she has continued to address issues of Afro-Latinx Identity and anti-Blackness through her writings. As a co-founder and national coordinator of the first ever National Hip-Hop Political Convention, Rosa helped bring together more than 3000 activists to create and implement a national political agenda for the Hip-Hop generation. She also co-founded the REACH Hip-Hop Coalition, a Hip-Hop generation-based media justice organization.

Rosa’s academic work has been dedicated to researching national liberation struggles inside the United States with a specific focus on The Young Lords Party (which she wrote her master’s thesis on), The Black Panther Party, and the Black and Brown Liberation Movements of the 60s and 70s, as well as the effects of COINTELPRO (Counter Intelligence Program) on such movements.

Francesca Menes is a social and political activist, Afro-Latina, survivor and advocate. She was born in Miami, Florida. Her parents migrated from the beautiful “Pearl of the Antilles,” Haiti to the United States in the 1970s. As Florida State Coordinator for Local Progress, a network of hundreds of progressive local elected officials across the country dedicated to shared prosperity, equal justice under law, sustainable and livable cities, and good government that serves the public interest, she works to bring progressive policy solutions to our local elected officials. Prior to joining Center for Popular Democracy, Francesca served as the Director of Policy and Advocacy for the Florida Immigrant Coalition (FLIC) and Political Director for FLIC Votes, where she led the development and implementation of strategic legislative, policy and voter engagement campaigns locally and statewide centered on intersectional social justice issues.

She co-coordinated the Florida Wage Theft Task Force, which led the passage of ordinances in several counties throughout the state, and coordinated a national network campaigning for Temporary Protected Status for Haitians. In 2014, she successfully led the statewide campaign “We Are Florida’s Future” to pass in-state tuition for undocumented students and led the campaign to establish the Office of New Americans of Miami-Dade County, establishing a public-private partnership to promote naturalization.

During the 2016 and 2017 legislative session, Francesca successfully coordinated the statewide campaign “We Are Florida’s Families,” which led to the defeat of 9 anti-immigrant and anti-refugee bills which sought to criminalize immigrants and remove from office local elected officials who support and vote on policies to protect immigrants regardless of their status. In 2017, she also led the passage of several Welcoming Cities and School District resolutions. Francesca also helped co-found the Black Immigration Network in 2008 and serves on the national steering committee.

Cindy Wiesner is a 25-year veteran of the social justice movement in the U.S. and internationally who currently serves as the national coordinator of the Grassroots Global Justice Alliance. She is also a steering committee of the Climate Justice Alliance, a group she co-founded, plays a leadership role in the Peoples Climate Movement that organized the massive mobilizations in New York, Washington, D.C. and the Bay Area in recent years, and is an advisor to Groundswell’s new Liberation Fund.

Cindy started organizing with HERE Local 2850 in Oakland, CA, and went on to become the director of organizing for People Organizing to Win Employment Rights in San Francisco and an organizer and board member for generationFIVE. She has also been a consultant for Men Overcoming Violence Everywhere and Mujeres Unidas y Activas.

She previously worked as Leadership Development Director of the Miami Workers Center and represented the group as a member of the U.S. Social Forum National Planning Committee. She has been active in many movement building initiatives over the years, including World March of Women, Social Movement Assemblies, International Council of the World Social Forum,  Fight Against the FTAA, UNITY, Building Equity and Alignment Initiative and, currently, It Takes Roots and the Majority.

Cindy’s main passions are training organizers in a transformative radical organizing model and building counter-hegemonic campaigns that not only fight what participants are against, but put into practice what they want to see manifested. She identifies as a lesbian and is of Salvadoran, Colombian and German descent. She is a grassroots feminist, internationalist, and movement strategist.