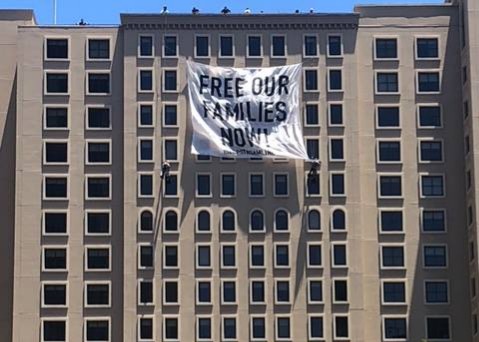 Yesterday, 10 protesters were arrested for participating in a peaceful civil disobedience during the #FreeOurFuture Day of Action in downtown San Diego. The action was intended to send the message that people around the nation are demanding the abolition of Immigration and Customs Enforcement agency (ICE) and the against the criminalization of migrants by the Department of Justice (DOJ).

The charges filed against them are of felony conspiracy, felony burglary, misdemeanor trespassing, and misdemeanor obstruction of justice and given each protester $50-60,000 bonds.  The 10 were arrested across the street from the Edward J. Schwartz Federal Building, where the DOJ is set to begin an operation next week of mass trials and convictions of immigrants arriving at the border. They were part of a mass mobilization organized by Mijente,  with the slogan “Free Our Future.”

“The attacks our communities are facing from the Trump administration require that we fight back in every way, sometimes putting our bodies on the line for what we believe is right. That is what those 10 protesters arrested yesterday did. Their actions forced a spotlight not just on  the Trump administration in Washington, but on the judges and officials right here in San Diego holding mass trials of immigrants, trials that will happen right acrros the street from the very building the protesters were arrested in.

The charges against them are extreme and cannot be read as anything other than an attempt to discourage protest. We call for the charges to be dropped against all the protestors, who were exercising their right to speak out against the atrocities committed by the Trump administration and Jeff Sessions.”

San Diego was chosen as the site for the mobilization due to the return of Operation Streamline to the city, slated for July 9th. Under Operation Streamline more people will be criminally prosecuted under Sessions’ “Zero Tolerance” policy. Operation Streamline is a federal strategy of mass hearings and mass imprisonment where immigrants are put into a courtroom, shackled at their hands and ankles, and convicted in groups of up to 70 people at a time, rather than getting individual hearings. At these hearings, immigrants with undocumented status face up to 20 years in prison for entering or returning to the country.