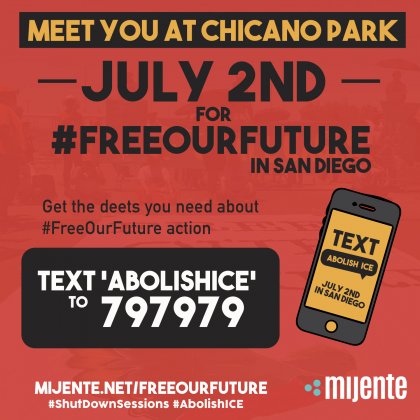 A NOTE FROM MIJENTE

We are excited about the actions taking place in San Diego this July 2nd, as part of the #FreeOurFuture actions. We believe that it is a key moment to resist white supremacy and the government’s law enforcement agencies that uphold it (e.g., ICE, police). It is an opportunity for Latinx people to take a stand.

We recognize that for undocumented and criminalized attendees who are traveling to be part of this action, this will mean a harder travel process and an assessment of risk that others might not have to consider.  We are providing this information with the purpose of making the process of researching risk and minimizing risk more accessible.

We strongly believe in the right of people to choose the kinds of risks they want to take in their lives and in our responsibility to support them through this process. This document could be helpful for everyone taking part in the July 2nd #FreeOurFuture actions, but is written with the needs of those who are not U.S. citizens, those who have had past contact with the criminal punishment system, and/or gender non-conforming people in mind.

If you don’t fall into any of these categories but will be traveling with people who do, it’s a good idea to read through this document, so you can be prepared to support your friends.

Have a solidarity plan

Consult with your attorney

Decide what to bring and what to leave at home

Pick a driver who has a valid license, registration and insurance. The driver is the person most likely to have to interact with law enforcement or immigration if the vehicle is stopped. Selecting a driver who is a citizen or lawful permanent resident (someone with a green card)  will be likely to reduce your risk. You do need a valid license (for Californians, an AB 60 license will be acceptable for state law enforcement), vehicle registration and proof of insurance to drive a car.

In addition to fixed checkpoints, CBP often has its officers posted in vehicles along the side of major highways and smaller roads, and will pull over vehicles that they deem “suspicious”.

The security screening and type of identification required is the same as traveling to other states. After getting a boarding pass, the next step is to go to a Transportation Security Agency (TSA) agent and show them an identification and Boarding Pass, followed by the security body scans.

International airports are considered “ports of entry,” or places where people can enter the U.S. from abroad. Both the TSA and Customs and Border Protection (CBP), two agencies under the Department of Homeland Security (DHS), are present at the airport, and both agencies have the authority to ask for immigration documents should they suspect that someone is in the country without status or is using false documents.

Types of Identification You May Present to the TSA

According to the TSA, documents that are acceptable forms of identification to show at an airport include (see website for a full list):

Body Scanners: Most airports use “Advanced Imaging Technology” that scans the profile of a person’s body and catch an “anomaly” or “alarm” including items that may be hidden under a person’s clothing. The NCTE notes that in some cases the scanners “can register body contours not typical for a person’s gender as anomalies. Foreign objects such as prosthetics, binding garments, or even paper or change left in a pocket will commonly register as anomalies requiring further screening. Often this consists of a limited pat-down of the area(s) where an anomaly was detected, however it can potentially involve a complete pat-down.” You can opt-out of scans at any time, but will be then required to undergo the pat-down.

The pat-down: A pat down may take place when there is additional information needed after the body scan or as an alternative, and can be very invasive. The pat-down must be performed by an officer of the same gender as the traveler, based on your gender presentation or identity. NCTE says that “transgender women should be searched by female officers, and transgender men should be searched by male officers. The gender listed on your identification documents and boarding passes should not matter for pat-downs, and you should not be subjected to personal questions about your gender. If TSA officers are unsure who should pat you down, they should ask you discreetly and respectfully.”

The TSA and CBP sometimes use advanced technologies. These technologies include Stingray technology, which can mimic a cell phone tower and access the texts and calls you are making. If you use an encrypted communication service like Signal, it will be harder to access your texts and calls using this technology. See above for ways conduct a digital security check prior to traveling.

Know Your Rights in San Diego

The ACLU has put together a basic overview of the rights someone has in a border area.

Are there limitations to immigration officials’ power?

The Fourth Amendment to the U.S. Constitution protects against arbitrary searches and seizures of people and their property, even in the border area. Furthermore, as a general matter, these agents’ jurisdiction extends only to immigration violations and federal crimes. And, depending on where you are in this area and how long an agent detains you, agents must have varying levels of suspicion to hold you. What does this mean in practice?

During the action, there will be very clear zones (green, yellow and red) marking the area. Green zones will be areas where arrest is unlikely (although possible, because police are police). Yellow areas are medium-risk areas, where arrest might happen. Red areas are high-risk areas – areas where it’s likely arrests will take place. You should make the choices that work best for you about what area you’d like to join.

Here are some things to consider while deciding what zones work best for you:

Consider doing the following if approached by an immigration officer:

If an immigration officer approaches you in a public area, such as a parking lot, do not run. You may be arrested if it looks like you are trying to escape.

Information sourced from the following places, as well as from conversations: