No Ban, No Wall, No Cages! #FreeOurFuture 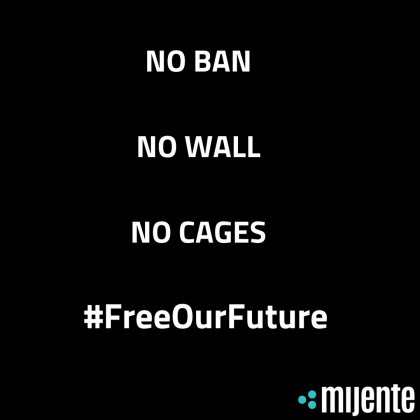 While the Trump Administration has intensified the war on Muslim communities in new and dangerous ways, our Muslim neighbors have been facing heightened threats to their survival for years. In the aftermath of 9/11, the U.S. government framed Muslims and immigrants as threats to the “homeland,” leading to the massive reorganization of the US government through the creation of the Department of Homeland Security (including the creation of ICE), the launching of the never-ending “War on Terror” and of untold violence against Iraqis and Afghanis by the U.S. military that continue to this day, and the creation of policies requiring Muslim men and boys in the U.S. to “register” with the government. Trump ran and was elected on a platform demonizing Muslims, and one of his first acts was to block Muslim immigrants from entering the U.S., many who were seeking to reunite with their families, pre-figuring the family separation that we are seeing played out today at the U.S.-Mexico border.