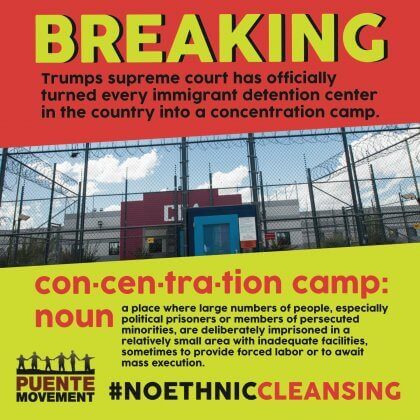 “The decision of the Supreme Court will have a permanent impact on our communities. With the eroding rights of immigrants, these bond hearings were a lifeline for many of our members fighting to stay with their families. The inhumane living conditions, the violence and impunity of ICE, and now the lack of opportunity for immigrants to present their case for freedom, turns these facilities into nothing more than concentration camps.

As the Trump administration ramps up immigration raids and enforcement and ICE takes advantage of its unchecked power the Supreme Court has paved the way for the exponential growth of people in detention, putting millions of dollars in the pockets of the private prison industry”

The Supreme Court ruling impacts immigrants held in the U.S. 9th Circuit Court who will no longer have a right to a bond hearing after six months of detention. Already in 2017, the two private prison companies responsible for most of the federal contracts to detain immigrants, CoreCivic and GEO, have each had stock value increases of 30 and 20 percent respectively. Each of the corporations gave $250,000 to Trump’s inaugural celebration.

Puente Human Rights Movement is a grassroots migrant justice organization based in Phoenix, Arizona that develops, educates, and empowers migrant communities to protect and defend our families and in order to enhance the quality of life of our community members.