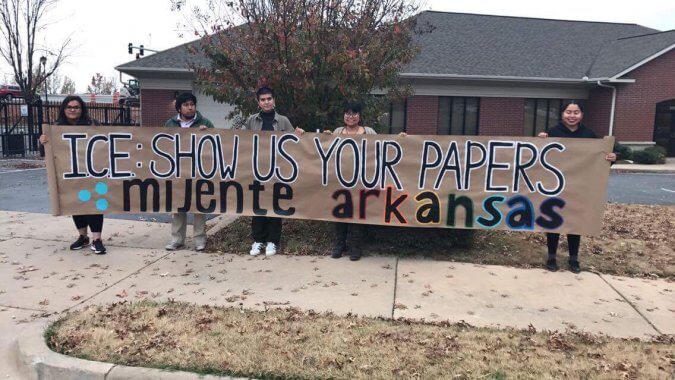 (Washington D.C) — Organizations around the country are highlighting local ICE enforcement tactics and filing a federal lawsuit against Immigration and Customs Enforcement (ICE) and the Department of Homeland Security (DHS) for refusing to release information regarding Operation Mega the recent announcement of what was supposed to be the “largest raid in U.S. history.”

The lawsuit is a response to the agency’s failure to disclose informationrequested by over 200 organizations and community leaders in early September via the Freedom of Information Act (FOIA). The information requested from all 24 ICE offices in the country included background, protocols, and procedures for the supposed immigration raid and other such mass operations.

At the same time as the lawsuit is filed, community groups around the country will highlight local conditions, community fights, and local ICE enforcement tactics, including the following:

“Filing a lawsuit against ICE will force the agency to reveal information that should be available for the public to see and denounce, but since ICE has refused to make the information public, we are going to make their tactics public ourselves. The testimonies and stories highlighted today show we already know what ICE has been doing in our neighborhoods,” explained Jacinta Gonzalez, Field Director at Mijente.

“ICE’s is an agency that regularly lies and actively hides information from the public in detention and throughout their operations,” said Danny Cendejas, Organizing Director of Detention Watch Network. “Today’s lawsuit filing is putting ICE’s egregious lack of transparency on check,” he concluded.

“We are filing this Freedom of Information Act lawsuit because ICE hasn’t responded to specific requests for information about planned mass arrest operations across the United States. Instead of stalling on these requests, ICE should promptly disclose information that we have asked and have a right to review,” said Paromita Shah, Associate Director from the National Immigration Project of the NLG.

Public Citizen Litigation Group and the National Immigration Project of the NLG, also a plaintiff, represents Mijente and Detention Watch Network (DWN) in this lawsuit, challenging the failure to disclose records in response to the FOIA request that included over 200 organizations and community leaders as requesters.

Mijente SC is a digital and grassroots hub for Latinx and Chicanx organizing and movement building. Campaigns combating criminalization, including the detention and deportation of migrants has been at the center of our work. Mijente SC builds from the successes of the #Not1More Deportation campaign, which sought a stop deportations through administrative action. Visit www.mijente.net for more info. Follow at @conmijente

The National Immigration Project of the National Lawyers Guild (NIPNLG) promotes justice and equality of treatment in all areas of immigration law, the criminal justice system, and public policies related to immigration. Visit us at www.nationalimmigrationproject.org or visit us at @NIPNLG.

Detention Watch Network (DWN) is a national coalition of organizations and individuals working to expose and challenge the injustices of the United States’ immigration detention and deportation system and advocate for profound change that promotes the rights and dignity of all persons. Founded in 1997 by immigrant rights groups, DWN brings together advocates to unify strategy and build partnerships on a local and national level to end immigration detention. Visitwww.detentionwatchnetwork.org. Follow @DetentionWatch.