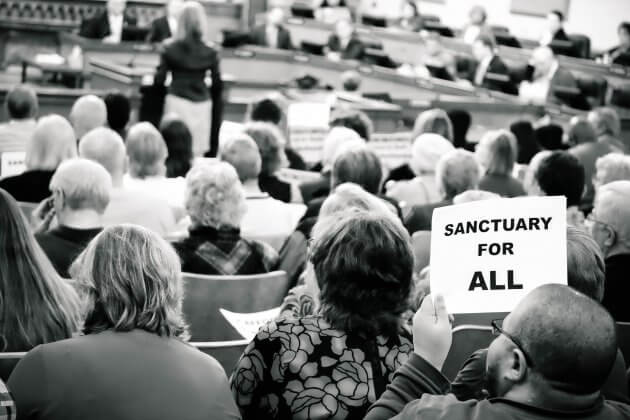 On October 26th, our comrades in the south showed us what bold and tireless organizing can do for our communities. Mijente members in Louisville have been hard at work all of this year organizing to pass a local sanctuary ordinance and one of the recent city council meetings resulted in a well-earned win. The LMPD-ICE separation ordinance, details an explicit policy that no government employee (from librarians to police) is able to ask for a person’s immigration status, or to assist with federal ICE agent efforts. Police will only respond when there is a warrant present, a crime is occurring or recently occurred, or signs of danger is present. This answers a gap in policy that sorely needed to be addressed on the grounds of what interactions LMPD should have when related to federal affairs.

In the spirit of celebration and claiming our organizing victories, we wanted to share this short interview we did with our folks who made it all happen:

Can you share a little bit about who your crew is? What skills and talents did you find you had that supported your organizing?  Our crew is a made up of  brown, black, queer, trans,  courageous organizers and activists who are dedicated and passionate about the work of social justice and liberation. We are a mixture of folks who bring different skills and experiences to our organizing. Some of us are talkers that enjoy communicating with media and press, politicians, allies and partner organizations; some of us fill in gaps like making meeting agendas, doing translations, speaking at rallies, organizing monthly meetings and bring the crew together. We also have folks that use healing, base-building, photography, screen-printing and a variety of other talents. We used all these skills to help move us to an ordinance win and build our power.

How did you all come into movement and this work in Louisville? Some of us are afro-latinx and had been getting more engaged in organizing with the Movement for Black Lives and came into Mijente work in Louisville through that experience. Some of us were students organizing for sanctuary on our campuses and some of us come out of doing different civic engagement work through local government. Back in 2015, a couple of us wanted to learn more about Mijente and traveled to Lanzate in Chicago to connect with folks nationally.  Since then, Mijente has provided a political home and a place where we could show up as our true selves, organize, learn, and connect. In March of this year we had 2 Mijente organizers come to teach and strategize with a statewide Kentucky team of organizer and have since been on the ground organizing weekly meetings, healing circles, creative visioning sessions, online group chat conversations, and strategy sessions to plan out our local work.

Can you give us a sense of the time-line of your campaign and organizing work? What all happened that lead up up to your recent win? In late 2016, a couple of us met with local activists to talk about what it would take to move a Sanctuary City Ordinance in Louisville.  In January of 2017 we decided to launch the Sanctuary for All petition with Mijente through the petition platform on mijente.net. This was after the Mayor put on a “Rally for American Values” in which he declared Louisville KY a “Compassionate City” for immigrants, but no plans for legal protections were actually presented. Within 48 hours after we launched the petition we had collected 500 signatures from supporters. We attended community meetings, convened Mijetne members and allies, formed a coalition of many groups across Louisville (BLM, KFTC, Planned Parenthood, ACLU, LSURJ, and many others) to build momentum. At our first City Council meeting in February 2017 we had a rally outside, a healing space, Sanctuary For All light projection on the front of city hall, and speakers inside. The chamber was packed and we had people in attendance sitting in the overflow rooms. We really were not expecting the momentum to build so fast. We had to just go with it and get  on that fast moving train quicky! In early September the Kentucky Center for Investigative Reporting released an article detailing several instances where the Louisville Metro Police Department and ICE worked as a joint task force to detain undocumented community members; collaborating exactly 23 times, despite different reports from our mayor and Chief of Police, we got some traction, and this policy was officially introduced.  After the release of the report, both the Mayor and the Chief announced they would examine these findings as they were in contradictory to the Mayor’s “Compassionate City”.  In response the community rose up and together we were able to put pressure on the Metro Council to push this local sanctuary ordinance through. Over 9 months we had 33 speakers at 18 different council meetings. We met with individual council members over many months. We’ve been showing up to those chambers at every meeting; the council members began to expect us. We didn’t let up.

What did it take to build with other groups? What were challenges or surprises?  It took outreach, education and base-building, consistently. It also took an ability to be transparent and vulnerable. We needed time and people to get the momentum built and that meant that we needed to organize potlucks, do intentional relationship-building, ask others how to support them and their work, etc. As always, there are personality clashes and groups may not always see eye to eye. There are real ego issues in activist circles.  But you learn to find common ground, you choose your battles and learn to support each other. Ultimately, we learned that there are people out there who want to do help, they want to believe there is something they can do to stand up for their values and make a difference. Finding those people and cultivating the relationships is an around the clock job that we were willing to do.

What were overall challenges to your organizing during this campaign fight? It has taken a lot of work (on spiritual, emotional, and physical levels) to build movement in these deep, heavy times. The work is messy, creative, new, and unpredictable. We may not always know what to do, have the answers, or be the most experienced, and it was challenging to remember and be ok with that at times. Another challenge was figuring out how to be heard.  We’re a small group representing our larger community and letting people know that this was an issue was definitely hard work.

How were you able to make this win happen and in turn build Latinx power for our people? Latinx power existed in Louisville long before Mijente showed up. What we really did was learn to access it. We offered our  Latinx communities a banner to gather under at a moment in time when we needed each other. Whether they were brown, black, queer, trans, etc we let our community know that they were all a part of this. We listened to and prepared people to share their stories in powerful ways and to people who had certain kinds of power. We demystified civic processes and showed up for each other in lots of spaces to show we could be there. We got to know each other and made commitments to be there for each other. So many of us are building relationships with each other just now and through this process. We stuck together and became more powerful together. Through sharing power, remaining horizontal, always asking questions, embracing imperfections, and non closure we are all showing up to this work as our true and authentic selves. We are in our power and using that power to build movement in our communities. It’s so beautiful to witness young people, intergenerational folks, undocumented people, Afro-Latinx, la raza, all coming together.

What happened at the council meeting where the ordinance was passed? It was intense, exhausting and sometimes infuriating. It’s difficult to describe the feeling you get as watching a room full of politicians deliberating the pros and cons of your future. There were a few council members who expressed strong concerns about losing federal funding citing threats by Jeff Sessions earlier this year. People like Councilwoman Angela Leet were determined to convince the rest of the council that this ordinance would not only turn Louisville into a cesspool for immigrant criminals, but deemed it unconstitutional. In the end however the ordinance passes with a vote of 16-7. I’ll never forget that feeling of relief and victory.

What’s next? We’re going to keep building and growing. More outreach, more training and more disruption. This ordinance is just the beginning. We plan on using it as a foundation because we are in a great place to continue to connect with many more people and organizations to really make Louisville a sanctuary for all. And of course, we need to celebrate! Our Mijente crew in Louisville has come so far in such a short time and taking the opportunity to be together is so important. We all may personally need a short break to replenish and regroup. After that, we hope we can host a convening of Mijentistas across Kentucky before the end of the year with our Mijetne national team. We will have a lot of work to do at the statewide level to stop any racist and criminalizing legislation coming our way as well. We’re also working on Mijente Para Familias, a new campaign to assist families affected by detainment and deportations with monetary assistance, meal drives, carpooling, and letters of support to the family affected.

Salem is Chilean queer organizer with Mijente and is based out of Washington, D.C.