Jeff Sessions is a Walking Monument to the Confederacy 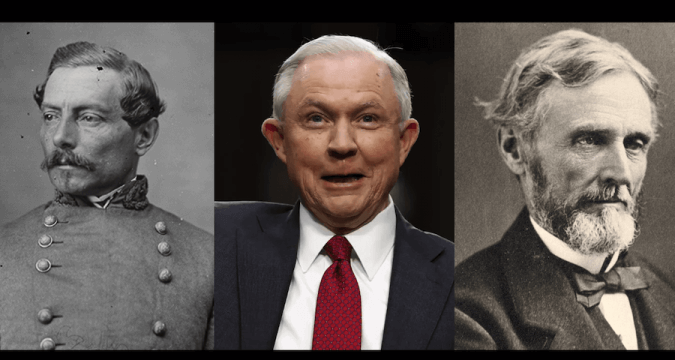 Jeff Sessions is a Walking Monument to the Confederacy.

I mean that literally, metaphorically, and politically.

He is named after Jefferson Davis. The President of the confederacy. The man charged with treason after the Civil War. That’s who he gets his name from.

(if you don’t believe me, just read wikipedia.)

So our current Attorney General is named after the person who ran the Confederacy, Davis. Davis and P. G. T. Beauregard that is.

Who’s that? Oh, Beauregard was just the first general officer in the newly formed Confederate army. He’s who oversaw the bombardment against Fort Sumter which literally started the Civil war.

The man is named after the President of the Confederacy and its first general who started the civil war.

Now, no one controls what name their parents give them. But they do decide what they do with it. When Sessions first responded to suggestions of Confederate memorials coming down, Slate reports he said:

It is not appropriate for us to erase history and who we are and our ancestors. I had ancestors—my great grandfather was killed at Antietam. I don’t think he was an evil person. He was called to serve his country as he knew it at that time and he did his duty leaving my grandfather, a baby, at home.

And on George Wallace, the Governor of Alabama who ran for President on a ticket of “Segregation now, segregation forever.” What was his response? Oh, just…

He’ll be remembered as one of the most formidable third-party candidates in this century, as a person who challenged the liberal elite in America.

So it doesn’t seem that a name is just a name in this case.

Jeff Sessions was too racist to be a judge so Donald Trump just made him America's top cop. Any questions?

That might explain why he was the first Senator to endorse Donald Trump. It might also show why in 1986 he was denied a federal judgeship for being “too racist.” A Black US assistant attorney who had worked for Sessions testified that he called him “boy” on multiple occasions.

It might explain why he thought that saying the KKK was “OK, until he learned that they smoked marijuana,” would be an acceptable joke.

But more seriously, it could also explain why one of Jeff Sessions first steps as Attorney General was to order the re-contracting of private prisons for ‘future need.’ It unmasks what’s behind his attack on affirmative action. Or why he argues that civil rights law do not protect employees from discrimination based on sexual orientation. Or his crusade against sanctuary cities. It also sheds light on why he has instructed all US attorneys across the country to prosecute more immigrants and to incarcerate them for longer with harsher sentences.

Sessions is following in the footsteps of another white resentment fueling, people of color criminalizing politician – Coleman Livingston Blease who made his name first as a South Carolina State Rep and then Governor who helped end Reconstruction and also as the inventor of the re-entry crimes that Sessions is now using to sweep immigrants into jail.

Across the country, people are taking it upon themselves to remove the symbols of enslavement and white supremacy and city governments are following suit.

But at the highest level of government, the man in charge of our justice department, is not just keeping that legacy alive. He is the living legacy of it.

So when we’re thinking about toppling monuments to a disgraceful and violent past, one has to conclude that that includes the man calling himself Attorney General in the Justice Department.

Jacinta Gonzalez is Mijente’s Field Director. She’s based in Phoenix, Arizona and wants everyone to understand the dangers of the Department of Justice in Sessions’ hands.