When Vultures Circle, We Do Not Run: Lessons from Detroit to Puerto Rico 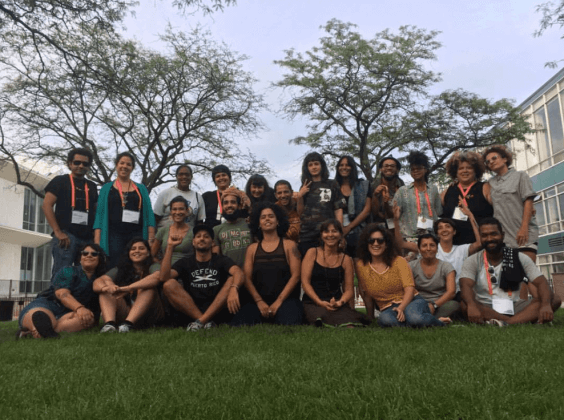 “We are living in a time of fast changing political and social conditions. Now is a time to Get Ready and Stay Ready.”
– Allied Media Conference

We three Boricua hermanas – Teresa Basilio based in Brooklyn, NY, Sofía Gallisa Muriente in San Juan, PR, and Adela Nieves in Detroit, MI – co-organized a delegation of close to 80 organizers and cultural workers from the Puerto Rican diaspora, the island, and Detroit to attend the 2017 Allied Media Conference (AMC) this past June.  The goals of this exchange were to share our work, our analyses, and strategize together on building a stronger movement for self-determination for our communities.

The decision to pull together this convening was decided on a year back in 2016 when  Puerto Rico-based organizations convened in Detroit to gather information and lessons from Detroit’s Emergency Management, with the goal of shaping and promoting new narratives around the Fiscal Control Board (PROMESA) in Puerto Rico. 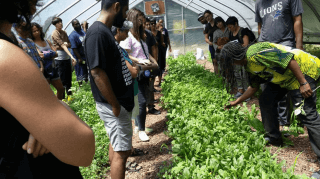 While in Detroit, presenters and community members strongly recommended that to build on the learning exchange, we consider returning for the Allied Media Conference 2017 (AMC) with a delegation of people involved in different grassroots initiatives and media-related efforts in Puerto Rico and the diaspora. We heard the call, and organized a Detroit – Puerto Rico Solidarity Exchange.

At the AMC we identified connections between the fights against the imposition of Emergency Managers and the PROMESA Oversight Board, as well as to uplift the creative interventions rooted in autonomy by grassroots communities in Detroit, Puerto Rico and the diaspora, and to seed new relationships between individuals and organizations representing these communities. (For a good summary on the impact of PROMESA in Puerto Rico please go to the Unidos Contra Promesa Puerto Rico Syllabus site at: https://puertoricosyllabus.com)

Detroit offers many examples of visionary organizing models
emerging in the midst of post-industrial crisis.

Detroit offers many examples of visionary organizing models emerging in the midst of post-industrial crisis. AMC would be the perfect place to gather with Detroiters who have faced an Emergency Manager of their own and to encourage significant exchange with Puerto Ricans from the island and diaspora who are essential to redefining our field of action. AMC is a space to collectively amplify our range of tools and frameworks for understanding and confronting the root problems of this recurring global crisis and strengthening our networks of solidarity. 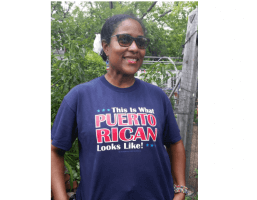 The first main event of the exchange was a day-long Network Gathering at the AMC. It was a room full of rich experience and deep knowledge, with people doing important and transformative work on the ground in their communities. The gathering included two panels, each comprised of people doing anti-austerity organizing and/or work centered on projects rooted in self-governance, and self-organized visioning sessions based on specific work, such as arts & culture, student organizing, creating media narratives, etc.

The lessons were many. One major take-away from the day was the identification of some of the same players who pushed emergency management in Detroit are now pushing the anti-democratic Junta’s austerity plans in Puerto Rico (including the international law firm Jones Day). These same vulture funds, political interests, media monopolies, and finance capitalists are pushing narratives of dependency and urban blight, while orchestrating a financial crisis as a means to justify their sustained looting of our communities’ labor and resources.  Monica Lewis Patrick “Water Warrior” highlighted why we need to identify these connections:

“When we first heard about the bankruptcy here…we heard these little whispers about Puerto Rico…we immediately knew what that meant… that you were next and so we began to send word to people we knew here and all across the country to say please inform PR about what’s happening…also it (water fight) is not separate from any of the other struggles. What you’re seeing in terms of the targeting of education is the same kind of targeting that’s happening in Detroit and all across the country in urban centers. What we know about that it’s deeply connected to a particular company and family the DeVos family & Veolia Company…is a part of privatizing water around the globe and privatizing education…and transportation…and so what we think is such a powerful tool is to intersect all of these issues….not everyone is going to know this…you have to orchestrate for everybody else how these things are connected…deputize yourself as activists…to understand that many people know what you know…you begin to connect the dots for other people so that there should be no resistance or no issue on the planet that you are not connecting your struggle to. That is another way to build our power.”

Puerto Rican delegates spoke of the need to re-frame the “debt crisis” as a colonial crisis rooted in the unequal relationship with the United States. Organizers from Detroit shared how they counter these narratives with new ones (#WageLove, Water is a Human Right, etc.) grounded in the preservation and celebration of community power and resilience.  Awilda Rodriguez Lora of the Colectiva Feminista en Construcción spoke about the formation, principles, and growth of their collective as they faced the Junta/PROMESA struggle and how they connected it to larger struggles against capitalism and patriarchy:

Panelists also spoke of the need  for deep networks of solidarity to publicize and educate about our struggles and to build relationships to sustain us in the long-term. Shea Howell from the Boggs Center and Detroiters Resisting Emergency Management spoke of the current moment:

“We are in a period of extraordinary transition and what is emerging will not be anything like the past…the system of capital has recognized it is not going to make money by producing things, it will make money by controlling our bodies and our most vital resources of land and water……We must create self-sufficient communities that are mile-deep in our history and those communities are the source of what are the ungovernables, but we must figure out how to govern ourselves…”

While Emergency Management and PROMESA are similar in implementation, the consequences of these policies look different in Puerto Rico and the U.S. We recognized these institutions as inherently anti-black/brown/poor, and we also acknowledged the differences in how constructs of race are identified and discussed. There are tensions inherent in these discussions, and they came out in the network gathering. This is not new in the Puerto Rican/diaspora community, and we hope our continuing work provides the opportunity for us to grow together around these issues, and to continue to hear and see each other in all our complexity.

In addition to the day-long gathering, attending conference workshops and presentations, delegates came together for social activities including a screening and dinner party hosted by Puerto Rican Detroiters, a block party in Southwest Detroit, and a tour of various community farms in the city (D-Town farm, Ile Ibeji, SWGRows & Bee Collective, and Georgia Street Community Cooperative Farm) to get a firsthand look at  the innovative ways Detroiters are integrating food sovereignty in their urban farming approach. On the last day, we also convened a group to identify next steps for each of our returns home and opportunities to continue building together. 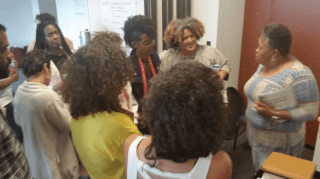 The first local report back took place at Casa Ruth in San Juan on July 6 with over 30 people attending, including most of the island delegates, to share their experiences and identify priorities to continue building and strengthening solidarity amongst our communities. Participants had a chance to reflect on the experience of traveling to Detroit, as well as comment on connections to their current projects in Puerto Rico, proposing ideas on how to continue building together. The next report back is slated for late August in New York City. There will be others in Puerto Rico, Detroit, Chicago and other US cities, to be determined.

A third-stage gathering is currently being organized to be held in Puerto Rico, with attendees from the island, Detroit, and the Diaspora. The visit would allow for the network to continue deepening their relationships while also sharing the experiences of Detroit with a wider Puerto Rican audience.

Thank you to Detroit Equity Action Lab(DEAL), Espacios Abiertos, Beta-Local and all the individual donors and supporters who helped us make this gathering happen.