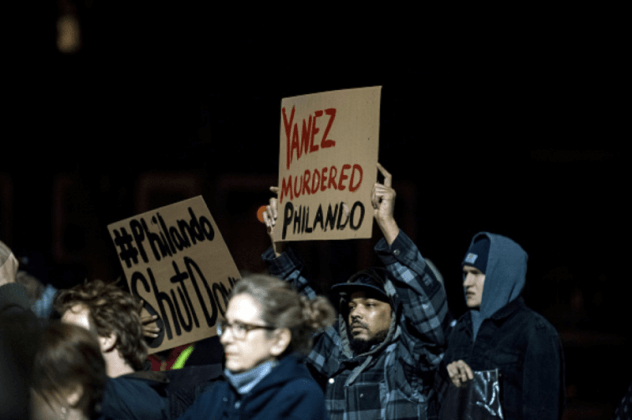 As news broke that a court acquitted Officer Yanez, the 29 year old Latino police officer who shot and killed Philando Castile while he wore his seatbelt and his girlfriend livestreamed from the passenger side of his car last summer, reactions of outrage and disbelief poured throughout the country.

LIVE NOW: Demonstrations are currently underway in St. Paul, Minnesota, over the verdict in the #PhilandoCastile shooting trial.FULL STORY: http://bit.ly/2skWSTn

Groups dedicated to racial justice called on others in the self-described resistance that rose after the Fall election to prioritize responding to this case and to incorporate work against state violence and racism into their program.

“We condemn the murder of Philando Castile and the routine miscarriage of any justice in Officer Yanez’ acquittal. Latinxs have to stand against racism and police violence tonight.

The fear that Officer Yanez had of Philando Castile in his passenger seat is one that is taught to us and one that is prevalent in our communities. We cannot denounce him without also actively confronting Latinx anti-Blackness. It must be undone.

At a time when the US Hispanic Chamber of Commerce is encouraging our community’s cooperation with the Trump regime and as non-Black Latinxs are courted into the project of white supremacy in this country, Philando Castile’s murder is a tear in that fabric that calls for us to resist.

For some of us this is an act of solidarity, for others it is an act of self-preservation.
Non-Black Latinxs need to show up for the movement for Black Lives including the
Afro-Latinxs who are often erased in these conversations.

Tonight we mourn with those who loved Mr. Castile. Tonight we share the outrage with those who are still waiting for justice to be made real in this country. Now, tomorrow, and onward we commit ourselves to a fight against criminalization, against state violence, and for racial justice for all of us, a justice that begins by making Black lives matter.

“As a woman who identifies as Latinx and a mother of Black children, now is the time for us to stand with our Black sisters and brothers like never before. Our struggles against systemic oppression and the criminalization of Black and Brown folks in our state and in our country are not two separate battles. In the Twin Cities, Black and Brown communities have carried the weight of this painful oppression and the real impacts it has on our daily lives in two separate lanes for far too long. Now is the time for us to carry this weight together and fight together against the systems that were built to destroy us.”

Emilia Gonzalez Avalos, the director of Navigate and a Mijente member based in Minneapolis adds,

“We call for Latinxs to protest this verdict because we will not let Officer Yanez be the face of our community. Instead he is the poster child for the real life consequences of when we let anti-Black racism go unchallenged. We want to live in a city where Black lives matter and Latinxs must be participants in making that slogan a reality.”