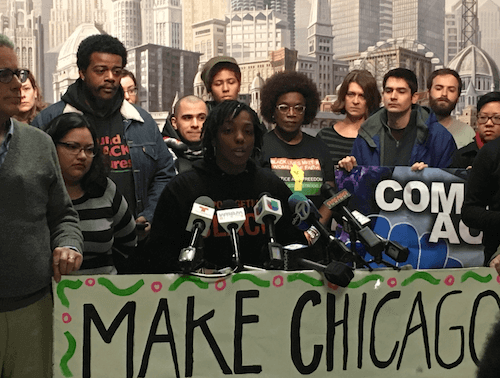 In the wake of Donald Trump’s attack on “sanctuary” cities, Black, Latinx, and migrant organizations are coming together to push Chicago to stand in defiance of the President, defend the constitution, and promote policies that offer real safety to all residents.

Rahm Emanuel has committed to keeping Chicago a sanctuary city, but residents assert that more is to be done to earn that title.

Janae E. Bonsu, National Public Policy Chair for the Black Youth Project explained, “Sanctuary – as the city of Chicago had defined it – doesn’t go far enough. Until the mayor and city council shows a real commitment to ending the criminalization of Black and Latinx people in policy and practice, sanctuary will remain an empty word to our people.”

Tania Unzueta, Legal and Policy Director for Mijente added, “Sanctuary in Chicago today means a commitment not just to symbolically defy Trump but to actually transform our city’s policies to stop targeting us for imprisonment, risk of removal, and state violence at the hands of police and aggressive immigration agents.”

"We are calling on people to organize. We are working towards building up sanctuary communities." –@_LaTania of @ConMijente #RealSanctuary pic.twitter.com/Yr34zTStio

Antonio Gutierrez, an organizer with Organized Communities Against Deportations added, “All Chicago residents deserve the right to feel safe in our homes and in our neighborhoods.”

"We will not let Donald Trump terrorize our Muslim, black, and undocumented communities." #RealSanctuary pic.twitter.com/g8udiqab0A

At the press event, the group proposed concrete, proactive steps that reduce the arrests and policing that endanger communities and place immigrant in Chicagoans in deportation proceedings. Those include: