3 Puerto Rico Protests You Should Pay Attention To 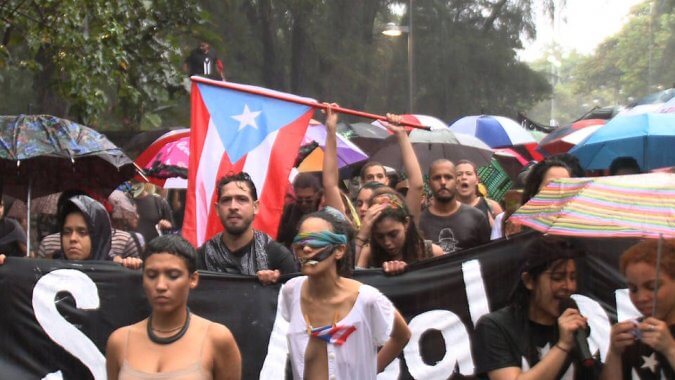 For Latinxs organizing in the continental United States, it’s easy to get overwhelmed with just issues within the country – there certainly is enough going on. But if we truly seek a powerful and inclusive movement of Latinxs in this country – one that accounts for the ways colonization has and continues to shape the ways injustice takes shape – we must keep our eyes on Puerto Rico as well. This key belief is one of the reasons Lánzate 2016 is taking place in San Juan: that issues of Puerto Rico and the boricua diaspora are issues that all Latinxs should know about and work on.

The last few months in Puerto Rico have been tumultuous, and the people of la isla resist at every turn. Below are three protests in Puerto Rico you should be paying attention to.

The Puerto Rico Oversight, Management, and Stability Act, or PROMESA, was passed in June to alleviate Puerto Rico’s debt crisis – a crisis fundamentally created by hedge fund investors who are  demanding to be paid at the cost of gutting public services and institutions on the island, from education to emergency food assistance. As part of the law, an unelected fiscal oversight board (whose members have deep ties to the banks and hedge funds who had a hand in creating this situation) is set to make cuts to services and take drastic austerity measures, and Puerto Ricans on the island and across the diaspora have been resisting. From protesting the first public meeting of the oversight board in Manhattan, NY to ongoing protests on the island against the oversight board’s sweeping powers to run the Puerto Rican economy.

On September 9th, hundreds of protesters shut down Puerto Rico’s biggest Wal-Mart, arguing that the corporation’s role on the island – along with that of other multi-national corporations like it – is damaging to the economy. A protester told Democracy Now:

“My name is Melissa Vargas Echevarría. I am an active member and spokesperson of the Camp Against the Control Board. I’m also a member of the Workers Youth. We closed Wal-Mart’s operations for the day, and, in part, this is proof that when the people unite, we win. We need people to keep coming out to these protests, so that every multinational begins stepping backward, and we’re going to directly affect the ones who affect us directly. While the control board remains, we’re going to continue.”

Starting on November 21, dozens have been arrested in Peñuelas, Puerto Rico while protesting the disposal of coal ash waste at the Peñuelas Valley Landfill. While communities cite a local ordinance against the use of coal ash, it has been used as daily cover at the Peñuelas landfill, and left in mounds where the ash – exposed to wind and rain – contaminates water supplies. AES Puerto Rico, LP – the company transporting the coal ash – has incurred a number of violations for contaminated water, and has been fined by the Environmental Protection Agency at least twice. Protesters have been blockading the transport of the AES coal ash, claiming the negative effects of fugitive dust and water contamination. An EPA study found that AES coal ash contains high levels of aluminum, arsenic, boron, cadmium, chloride, chromium, fluoride, lead, lithium, molybdenum, selenium, sulfate, and thallium.