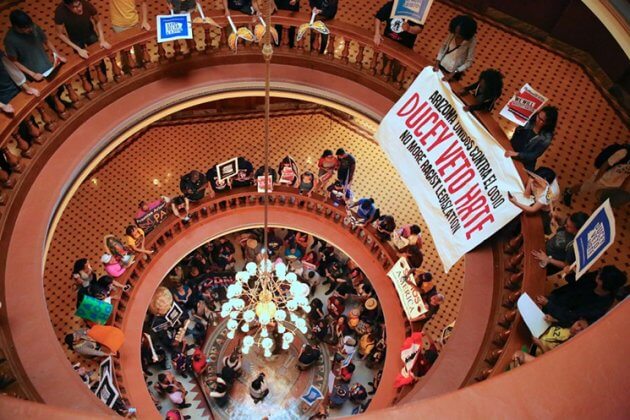 Frame: When Arizona legislators started proposing a new round of anti-immigrant bills in 2015, Puente Human Rights Network labeled them “Trump bills” and tied them to the famous racial profiling law from 2010, SB1070, that cost the state millions of dollars.

Opportunity: Unlike the extremist he replaced, Arizona’s Governor Ducey positions himself as more reasonable. Arizona politics have the potential to be changing but they won’t if the legislature and the governor go back to the anti-immigrant days of the past.

Puente worked with a broad coalition to plan the big events and also moved other pieces on its own.  That way everyone interested had a way to plug-in but they were also able to stay nimble and respond however the moment called for.

By painting the bills as part of Trumps’ hate and racism and tying them to past efforts that were extremely damaging, the campaign made them toxic.  By mobilizing en masse and taking dramatic action, groups demonstrated support and also foreshadowed the opposition and even chaos that officials could expect if they made the bills into law.

Not every bill got blocked, but the majority did and groups on the ground showed strength that should make proponents think twice before re-introducing them.