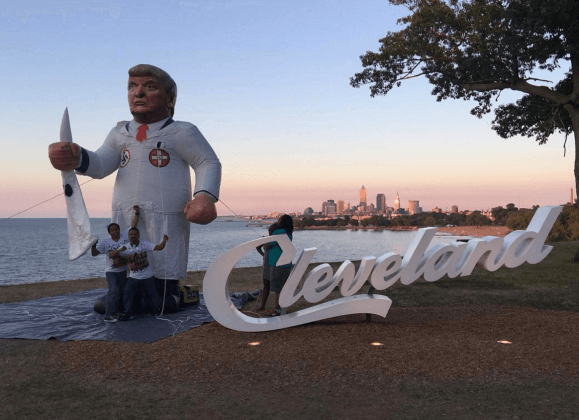 Resistance in Reaction to Trump: We Will Not Be Governed by Fear

If it was unclear before why it is a national responsibility for all of us to wall off Trump, his acceptance speech should have ended any doubts.

Unlike Donald Trump, we believe that times of uncertainty call on us to seek out shoulders to stand beside not necks to step upon.

As our country faces enormous change in its economy, its demographics, and in the world around us, Donald Trump is responding from a place of fear and with a promise of violence.

But we believe our safety is not in stereotypes or stoking division. We believe our security comes from our connection to each other, across communities and across movements, and our persistent push for a better world for all of us.

As people who know politicians’ broken promises better than the billionaire candidate who has spent his life funding them, we are not for either party. The people in the penthouses have never solved the problems of the people on the street but they have often sent us to fight their wars, turned us to fight each other, and used us to fight our own advancement.

His speech was another example of that. He did not give our country a way forward or a path to prosperity. It gave a panoramic view of the bigotry, cheap opportunism and fear mongering that characterizes his campaign for President.

Since the start of his campaign, Trump has committed himself to a lineage of white supremacists and a place in history alongside forces of hate. Now that he is the official nominee, there must be an equal commitment to stopping him.