Protesters to Wall Off Trump’s Hate at RNC in Cleveland 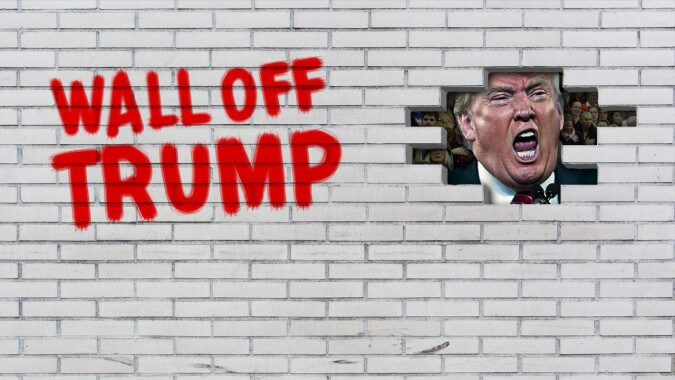 Instead of a Border Wall, Mijente and Others to Erect Thousands of Feet of Wall at RNC to Surround Convention

In response to Trump’s insults, threats and his promises of mass deportation and building a border wall to separate neighbors, communities are traveling to Cleveland to give him a wall of their own.

While Trump’s wall is an emblem of his xenophobic drive to Make America Hate Again, the protest wall to be built by organizers, artists, parents, children, and veterans gathered together by Mijente, the Ruckus Society, Iraq Veterans Against the War, Working Families Party, the Other 98%, First Seven Design Labs, and others will be a line of defense for the future of the country.

To fund their project, the groups launched an Indiegogo offering donors the opportunity to have their name painted on the wall or receive anti-Trump artwork. It already has over $5,000 in donations.

“In polarized times we need to be building more bridges between us and less walls that divide us,” explains Marisa Franco, director of Mijente. “But if Trump is set on building a wall. We’re going to give it to him. But we’ll be walling off his hate. We won’t go quietly as he campaigns to put us back in the closet, back across the border, or to the back of the bus.”

Eva Cardenas of the Ruckus Society added, “Standing with front-line communities to create a line of defense against Trump’s hate and racism is a national imperative. In Cleveland we’re not just sending a message against Trump, we’re calling on everyone to stand up and take responsibility for the future of this country.”

On the third day of the Convention the wall builders will erect thousands of feet of protest wall in Cleveland to stand up to the hatred represented by the Republican candidate, defend their communities, and serve as a call for bridges not walls in divided times.

What: Protesters to ‘Give Trump his Wall’ with Thousands of Feet of Symbolic ProtestWhen: 11:00am, Wednesday, July 20th, 2016

Who: Mijente, the Ruckus Society, Iraq Veterans Against the War, Working Families Party, the Other 98%, First Seven Design Labs, and more.