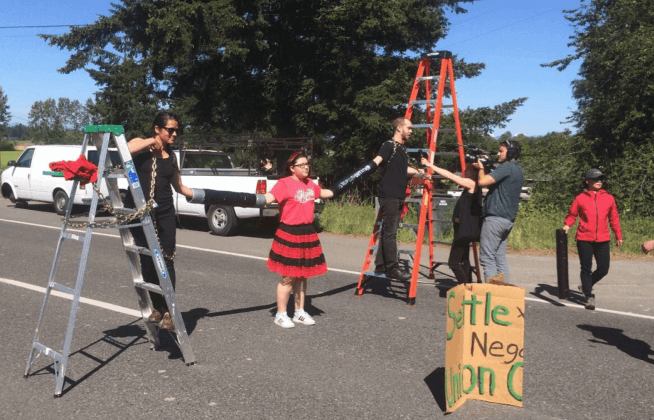 Lynden, WA – Over dozen residents of Whatcom and King Counties are blocking two main streets leading to the rally of Republican Presidential candidate Donald Trump in Lynden, Washington. The protesters are risking arrest with a “Make Lynden Coast Salish Again,” banner adapting the known slogan to contrast the town’s former Native American name and heritage with its modern history of racism, which includes being the location of the largest gathering of members of the Ku Klux Klan.

Lynden is also the subject of a current campaign against racial profiling by local police, stemming from disproportionate rate of arrests of Black, Native American and Latinx residents, a high number of incidents of police harassment, and their continued participation in the deportation dragnet.

“As someone who has grown up in Washington, today I am putting my body on the line to stop fascism from taking over our country. Today I am fighting for my mom, for my Native American neighbors and friends, and anyone who has been the target of hatred whether it comes from Trump or the local police. The residents of Lynden today have a chance to stand with us and reject hate,” said Josefina Mora, 18, one of the participant’s of today’s action whose mother is an undocumented immigrant organizer with Northwest Detention Center Resistance and Mijente in Seattle.

In addition to Mora, the participants in today’s demonstration included another young woman, Michaela Vendiola part of the Walker River Paiute and Swinomish Native American community in Whatcom County.

On the eve of the protest, Marisa Franco, Director of Mijente stated that “The general public will continue to do what the Republican party and primary electorate would not – resist and reject the divisive and extremist rhetoric his campaign represents. Communities are protesting today because they already know the painful and ineffective impact of immigration policies that separate, incarcerate and harm and Mr. trump only presents more of the same in the wrong direction.”

Just over six weeks ago residents of Phoenix, Arizona blocked roads leading to a local Trump rally. Jacinta Gonzalez, Field Director of Mijente, a U.S. citizen, and the only Latina arrested that day, was held in Sheriff Arpaio’s jail longer than other protesters due to an immigration enforcement hold while they checked her immigration status.