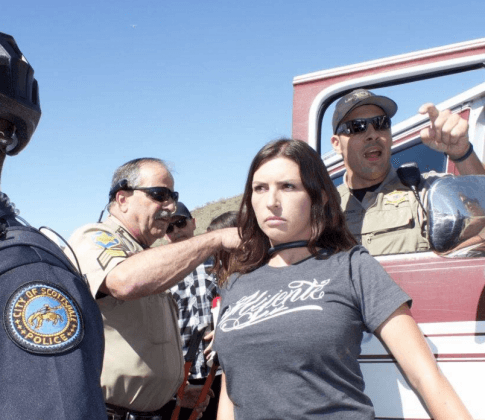 Yesterday a multiracial coalition of immigrant rights, faith, labor and local activists peacefully rallied as well as shut down both of the main roads leading to Donald Trump’s event to stand #UnitedAgainstHate and protest the racist violence his campaign is causing.

Among those arrested at the rally was Jacinta Gonzalez, field director for Mijente, who had locked her neck to a vehicle blocking the principal route to the rally.

However, unlike the two other arrestees, Gonzalez, who is a citizen of the U.S., wasn’t released last night. Instead she was transferred to federal deportation agents to investigate her immigration status as a result of her Latino surname.

“The two others were able to go home but because of my last name I was questioned by ICE and transferred to their custody.” Gonzalez explains, “As I was trying to defend my rights inside, I saw the faces of two children in one of the holding cell. We’re going to continue to fight, to say #Not1More, and Dump Trump.”

In a statement released the previous day, protesters pointed to the Trump effect as cause for a package of anti-immigrant laws being proposed in Arizona’s statehouse – including those sponsored by the husband of Linda Kavanagh, the Mayor of Fountain Hills where the Trump rally was planned.

“In Arizona we’ve heard Trump’s hate before and we know where it gets us,” said Carlos Garcia, Executive Director of Puente Arizona in reference to the 2010 SB1070 that cost the state $200 million after a boycott and caused international embarrassment as the state became synonymous with racism. “The Trump effect isn’t just about a candidate. Trump’s ugly rhetoric is being turned into policy proposals as we speak that threaten the wholeness of our families and the safety of our communities. All people of conscience have to unite to stop it.”

“People will not sit quietly as Trump campaigns to move us back in the shadows, to the back of the bus, or back in the closet,” adds Marisa Franco, director of Mijente, a national hub for Latino organizing involved in the protest today. “The greatest act of love we can show is to shut down hate where it rears its head and demand that we do better than the cheap politics and false solutions that Trump is peddling. The billionaire may want to pit poor people against each other but our necks are not available for standing on.”