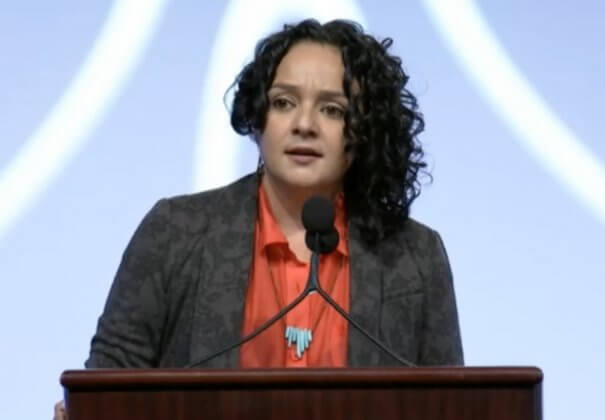 Below is a transcript from the acceptance speech given by Marisa Franco at Creating Change 2016 in Chicago, IL for Leadership on Immigration

So when Matt Foreman called me about this award, he told me he had heard I was a bad ass dyke. What a criteria. I like that.

I am a bit of a movement rolling stone, I have worked in many sectors. I come to you all from the desert of Phoenix, Arizona. I have helped lead the Not1More Deportation Campaign and most recently founded Mijente, a Latinx and Chicanx movement building remix organization. I would be remiss not to name organizations who took a leap of faith to co-build this campaign: TLC, Familia and SONG. I want to send love to Chicago Black-led organizations on the front lines, who demand an investment in Black futures rather than murderous policing.

Some of you first heard of the Not1More Deportation campaign through the actions and words of Jennicet Gutierrez, who spoke out as a Trans undocumented woman of color at a White House LGBTQ fandango – where she was told by a gay leader: This is not for you. She was told that it was not for her although she stood there from a lineage of all our community who made a way when there was no way, who bashed back when they had to, who provided political and spiritual cover so the rest of us could come ahead.

When we started Not1More it was not popular. Leaders in our own movement told us that Comprehensive Immigration Reform was the ONLY win that our communities should be focusing on, that stopping deportations was not in the cards, except for maybe Dreamers. But we tried anyway. Movements in this country has come alive because so many people simply can’t wait anymore. And when we seek to enter movement, and we converge, these spaces, they are sacred, because they are a form of sanctuary.

Sanctuary is a spiritual stance.

It recognizes that oppression is trying to fill our lives with fear and blood and daily numbing horror, and sanctuary says: not in here. Not in my home. Not in my bed. Not in my movement.

Sanctuary makes a ring of fire around our people. Sanctuary grants us a taste of reprieve and protection so we can gather strength to go out there again and fight.

Sanctuary is our duty. And after hearing that Immigration and Customs Enforcement was granted access to this conference to present on their PR and band-aid advances to deporting our community more ‘humanely’, it makes me think that there is no sanctuary here.

And that makes me feel all kind of ways – because you see, when you are a rolling stone, you see what things are like in other places – and I can tell you…there are things here in the LGBTQ sector that are precious. There is history, there is legacy, there is shared experience across a wide spectrum of human beings.

In movement spaces, we simply cannot be neutral. In the face of such abuse of power & injustice by our adversaries – what do we even mean by the words dialogue and inclusion?

A movement space must hold sanctuary. Leaders must discern and consider. And THAT is why we do not want police up in this space either, not here. Its not just ICE, its police. If you are undocumented, if you are broke, if you got a record, if you are Black, if you are Palestinian our movement needs you to be here.

It is not that we demand a utopic political purity everywhere we step foot. That’s not the reality. The reality is this – we all know we leave this space to face everyday as it is– and some of us, may not be here again this time next year. And to forget these sacred things, it gives pause. Because if we can’t build a Johnny Cash ring of fire in a conference, how is this to be protected in the street, at the policy negotiating table – with agencies whose purpose is to police, incarcerate and deport us?

The way I see it there are some differences of opinion around here about what this movement is gonna move going forward. And who moves a movement. I can tell you that more and more we will be asked a simple question: What side are you on?

More and more we will be asked a simple question:
What side are you on?

I hope that we don’t look back at this moment and say we watched. I am not asking you to adopt my rage as your own. A strong movement holds multi-plicity, but it must always be rooted in justice. I am asking you to have our back, I am asking some of you to consider using your access to make room.

Be proud, beautiful, chosen family — worlds are changing by your bravery.

As a freedom fighter, as a woman of color, as a bad ass dyke, I want to see that power, that pride exhibit a force that stretches beyond the borders of issue.

For those of you here who want to take it to that next level, I look forward to fighting by your side. Thank you.